A 42 year old woman was referred for vision loss in her right eye over the past week. Past medical and ocular history are unremarkable. The patient noted generalized malaise as well as tongue ulcers, hives, and generalized swelling in the face and body prior to the vision loss. She has not seen a medical doctor.

On examination, visual acuity was OD: 20/150 and OS: 20/20. IOP’s were normal. The anterior segments were quiet. There was a 1+ RAPD OD. Visual field of the right eye showed a large central scotoma – left eye was full (see below). DFE and testing: 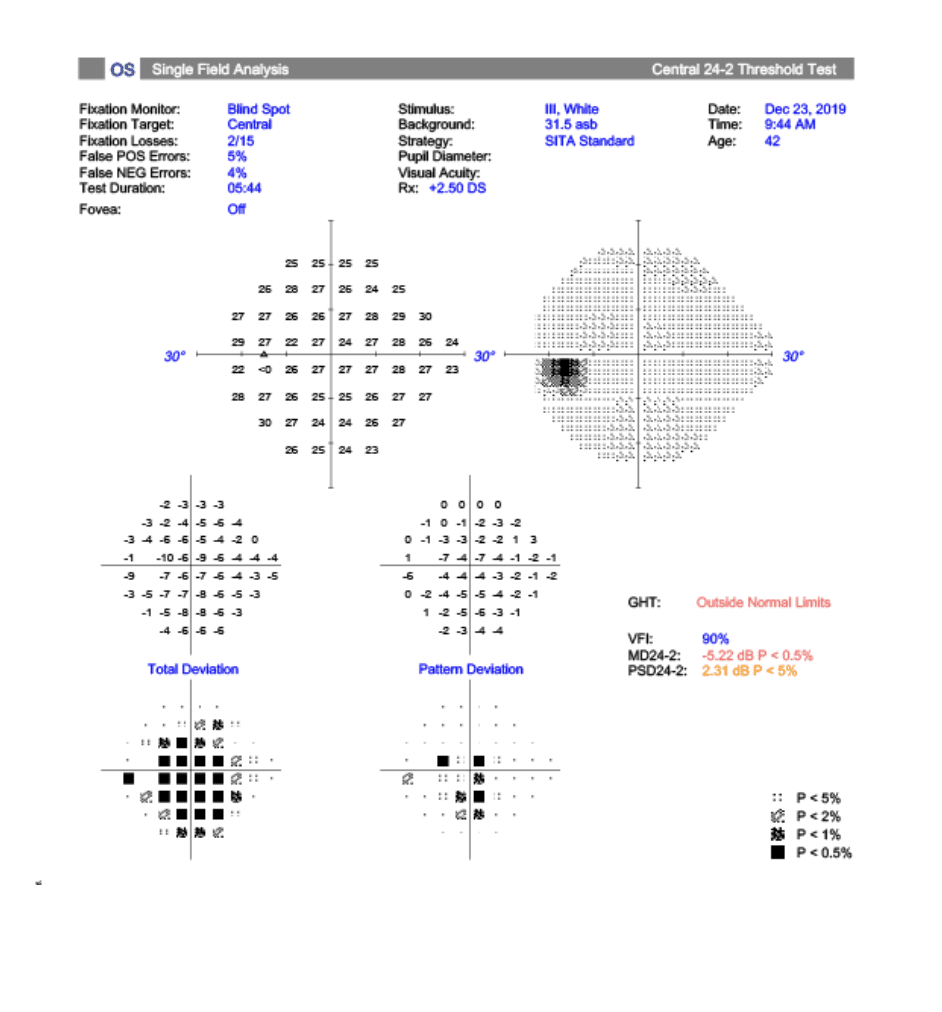 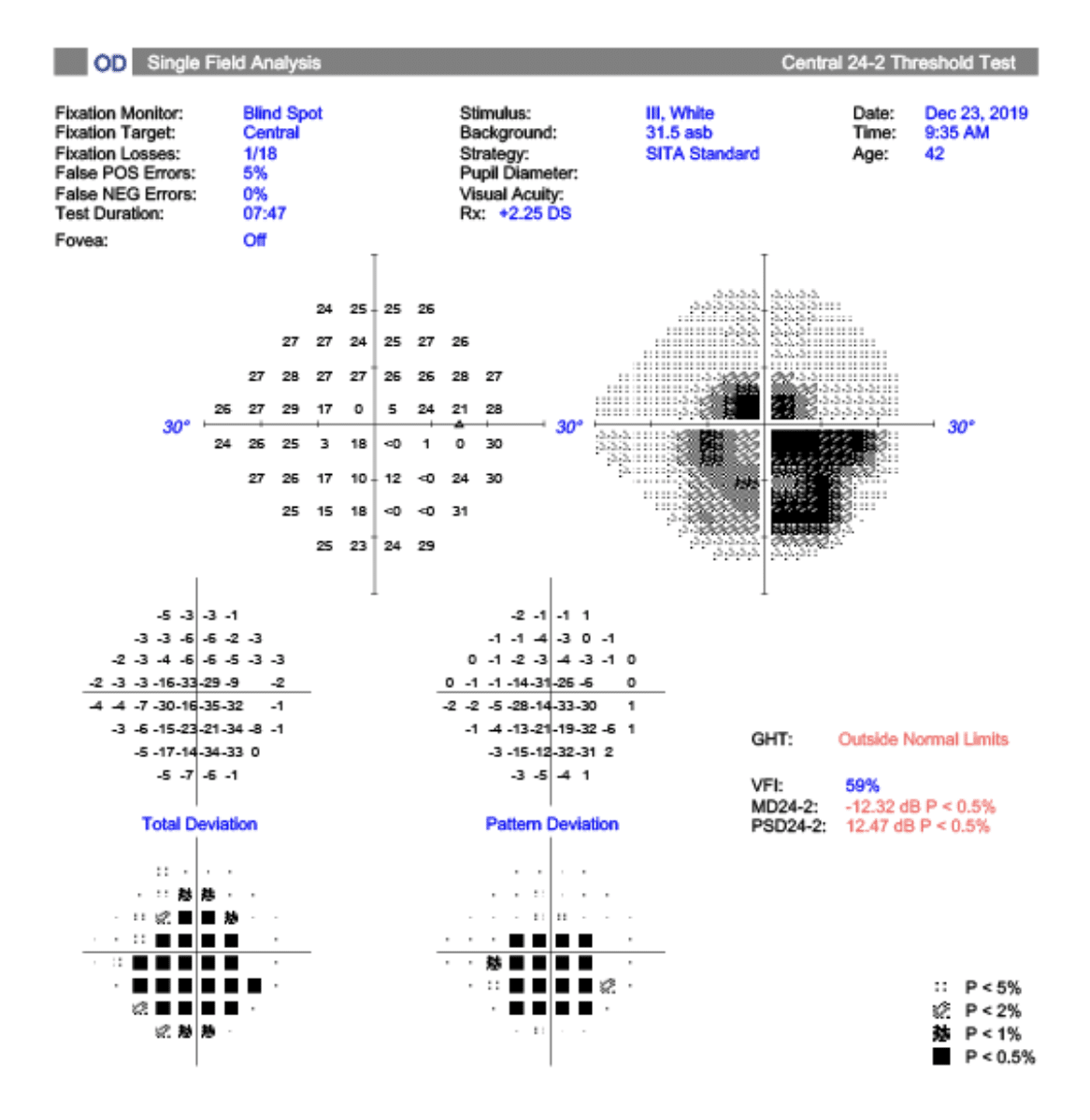 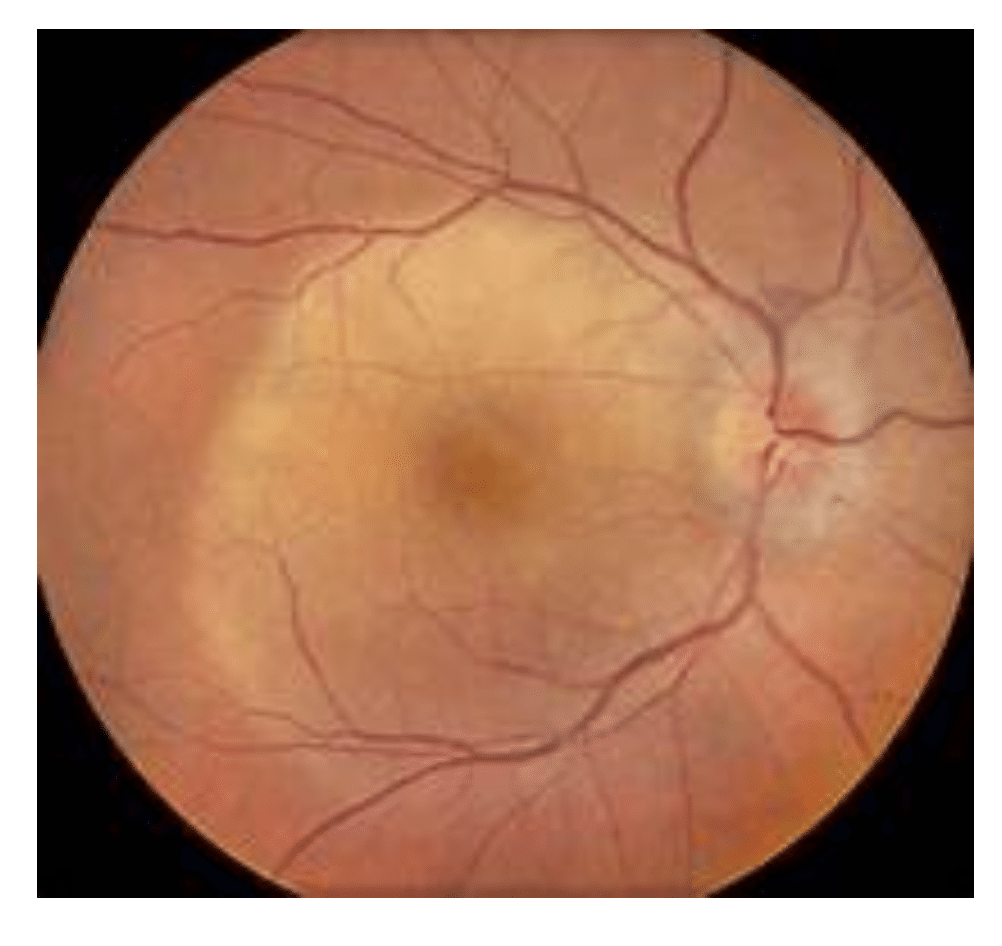 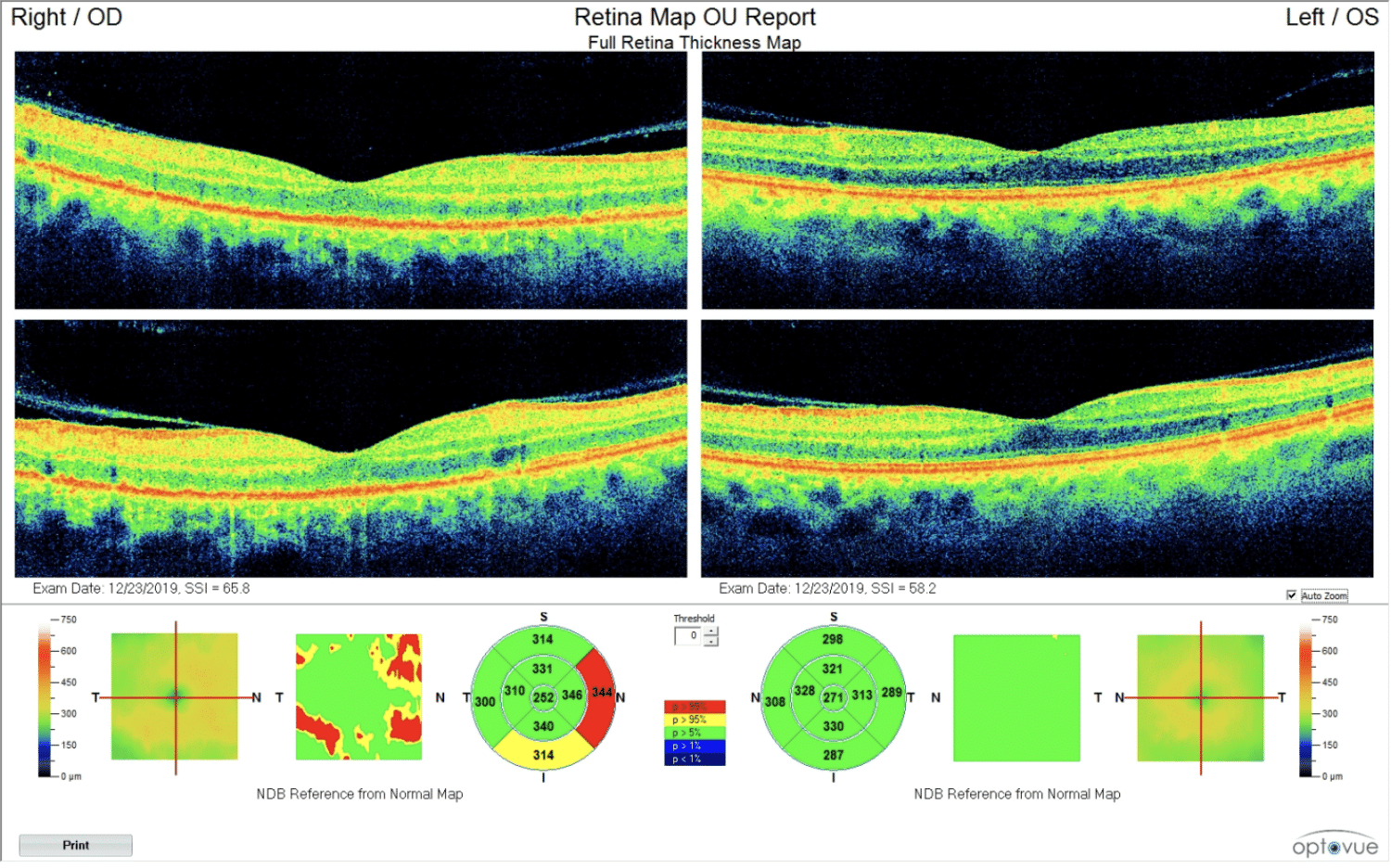 The patient was noted to have retinal yellowing and optic nerve edema with central visual field loss and OCT thickening. There was no subretinal fluid or emboli. This case is interesting both for the retinal appearance as well as the systemic complaints. Sometimes systemic complaints are interesting but unrelated to the retinal findings – in our patient’s case there was no doubt that they were related. The differential diagnosis for retinal yellowing with or without optic nerve edema includes vascular occlusion vs inflammatory vs infectious. A first thought was that the tongue ulcers and retinal yellowing are often seen in the inflammatory condition Behcet’s Disease. Although this was a possibility, Behcet’s is most common in Asians – our patient was Caucasian and originally from Europe. Vascular occlusion can be ruled out – no embolus was present and the retina had pale swelling, rather than an acute bright yellow swelling seen with an artery occlusion. In addition, optic nerve edema would not be present with an arteriolar occlusion. That leaves infection and inflammation as the possible etiologies. The systemic symptoms can be present with either, so we ran a battery of tests to look for the source of the problem. These tests included RPR, ANA, ACE, Lyme titers, ESR, CBC with platelets, West Nile Virus titers, ANCA, and herpes virus titers. The patient was empirically started on oral prednisone and was told to see her medical doctor for testing.

She returned one week later with an improvement in her symptoms to OD: 20/50. She had been using 60mg of oral prednisone daily. She had not yet seen her medical doctor. She was told to see her doctor immediately and return in a week. 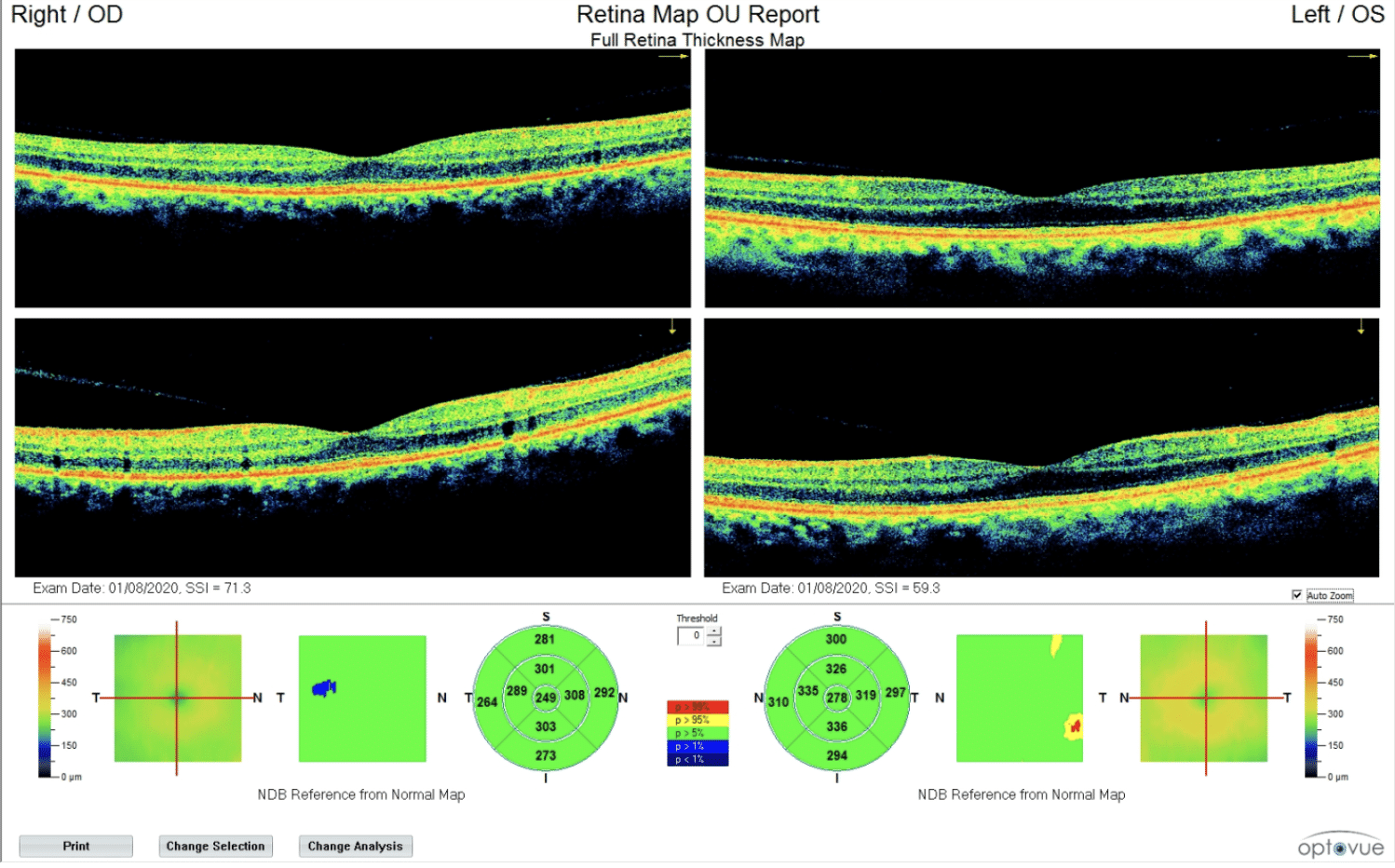 The patient returned 6 weeks later. Why was she gone for so long? Her syphilis test (RPR) came back positive. She was admitted to the hospital for a spinal tap which was positive. She was diagnosed with neurosyphilis. She underwent three weeks of IV treatment with Penicillin and was discharged with a course of continued IM Penicillin injections. The good news was that her vision had returned to normal! Acuity measured 20/20 OU. DFE showed a resolution of the retinal yellowing and optic nerve edema. This case illustrates the importance of a thorough systemic evaluation in patients with unexplained ocular inflammation. Syphilis is uncommonly diagnosed as a cause of ocular inflammation but should always be in the differential. Fortunately our patient obtained the appropriate medical tests and treatment and fully recovered. 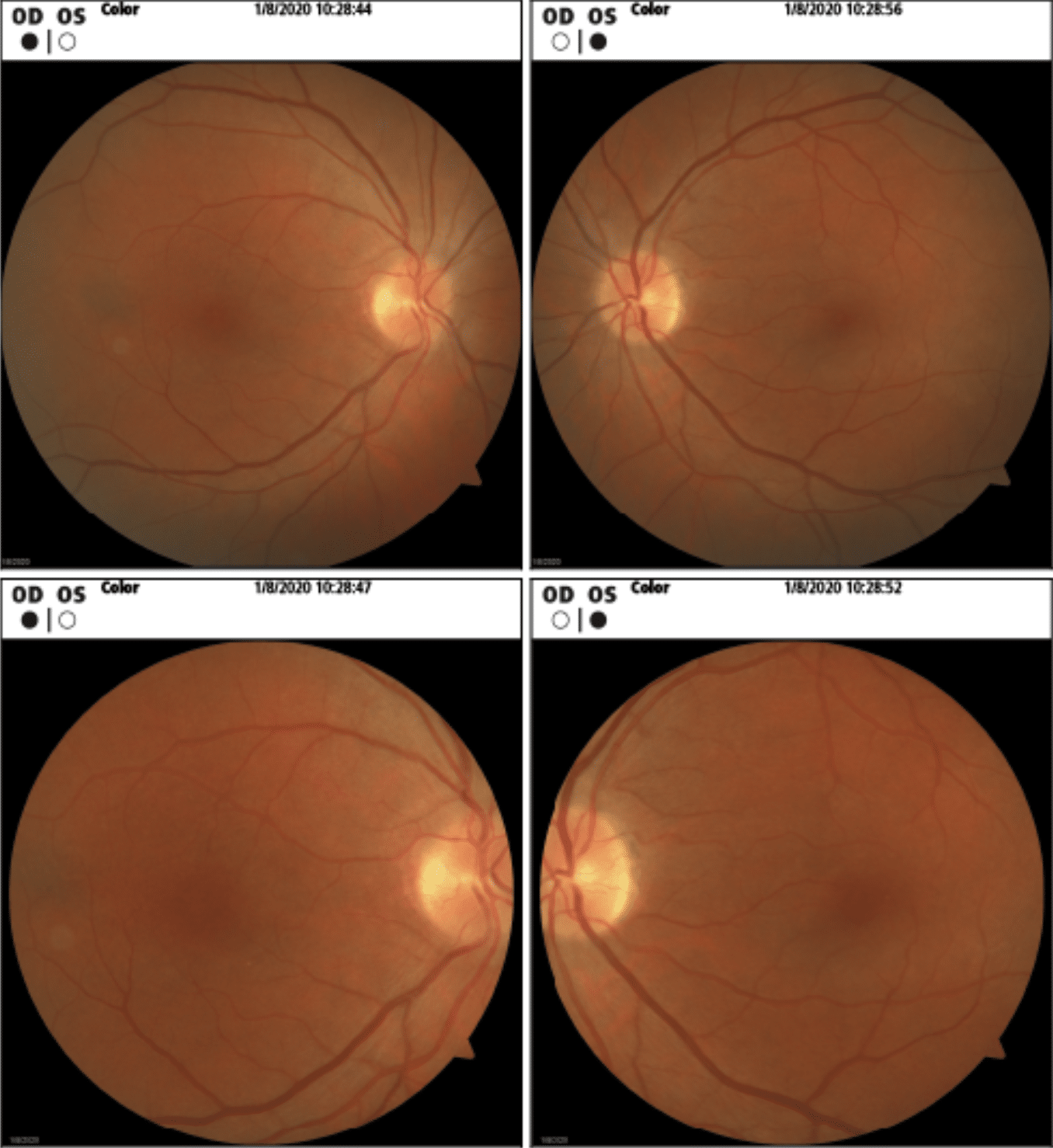 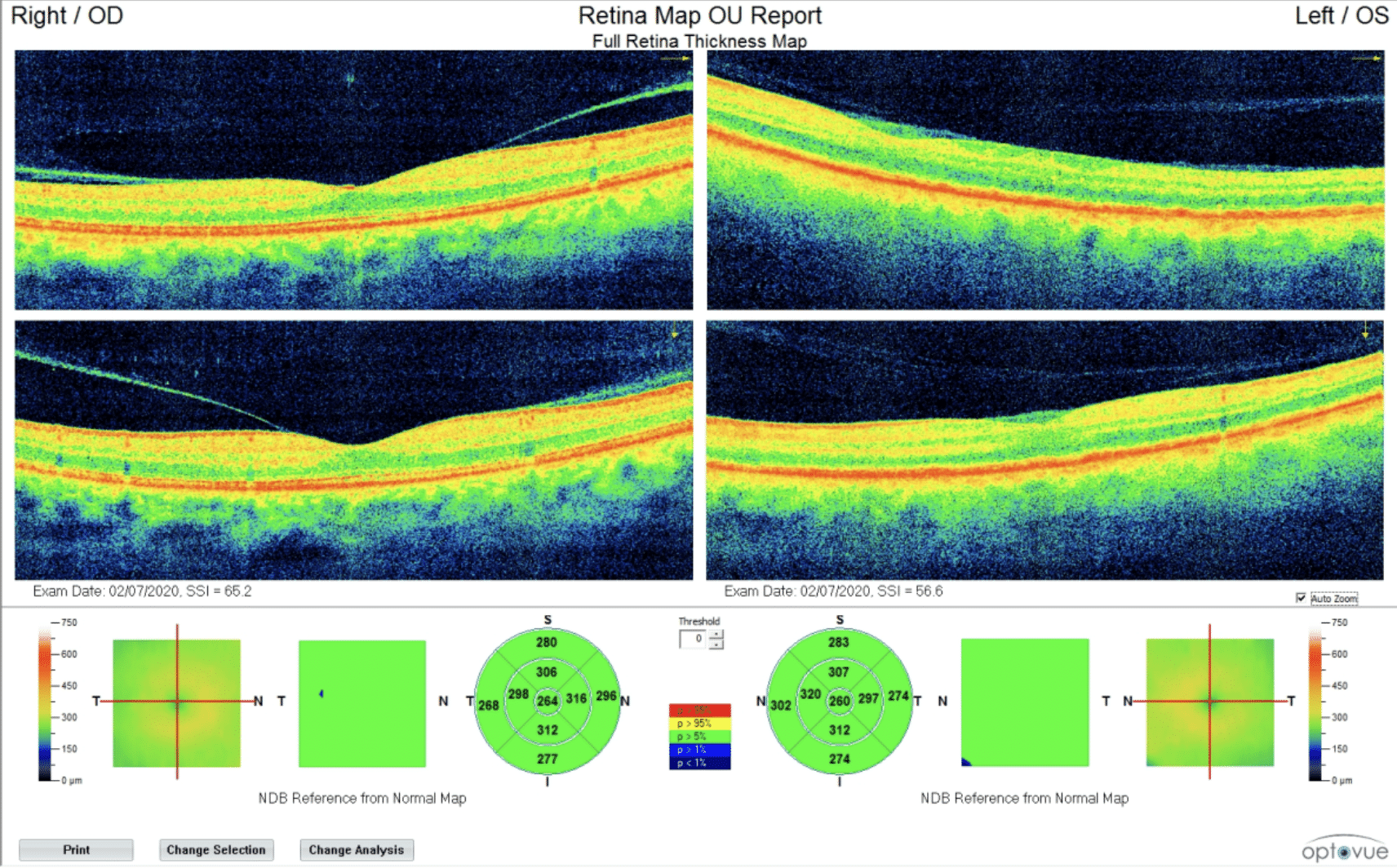