CC: 75 yo woman was referred for evaluation for “wavy vision” in her left eye for a week. She also reports a dark spot in her central vision.

Widefield color fundus photos of the right eye was unremarkable 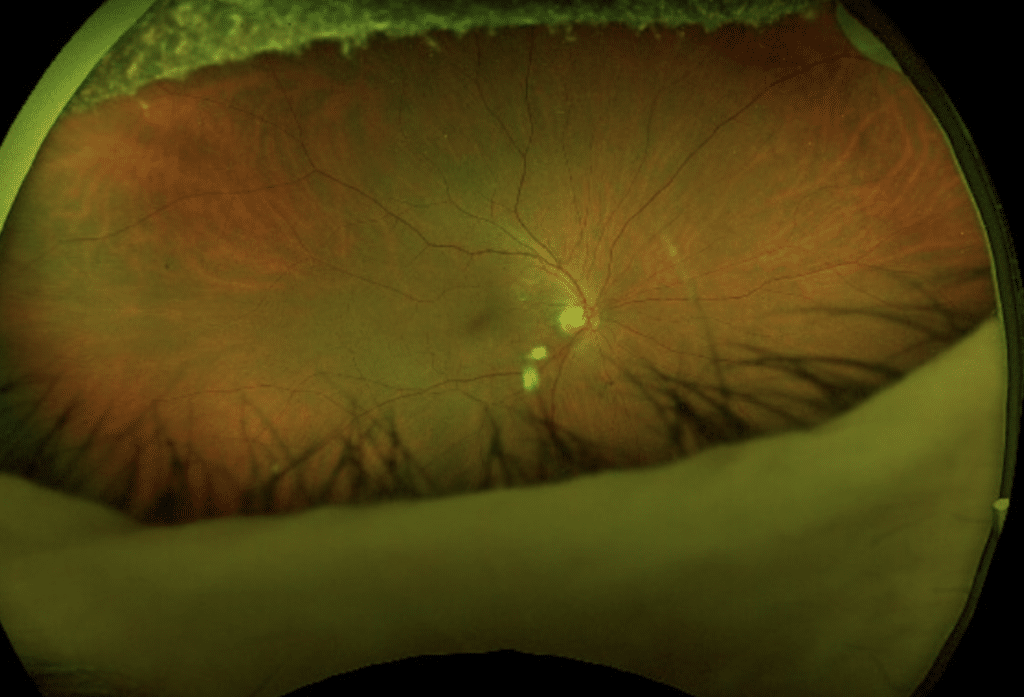 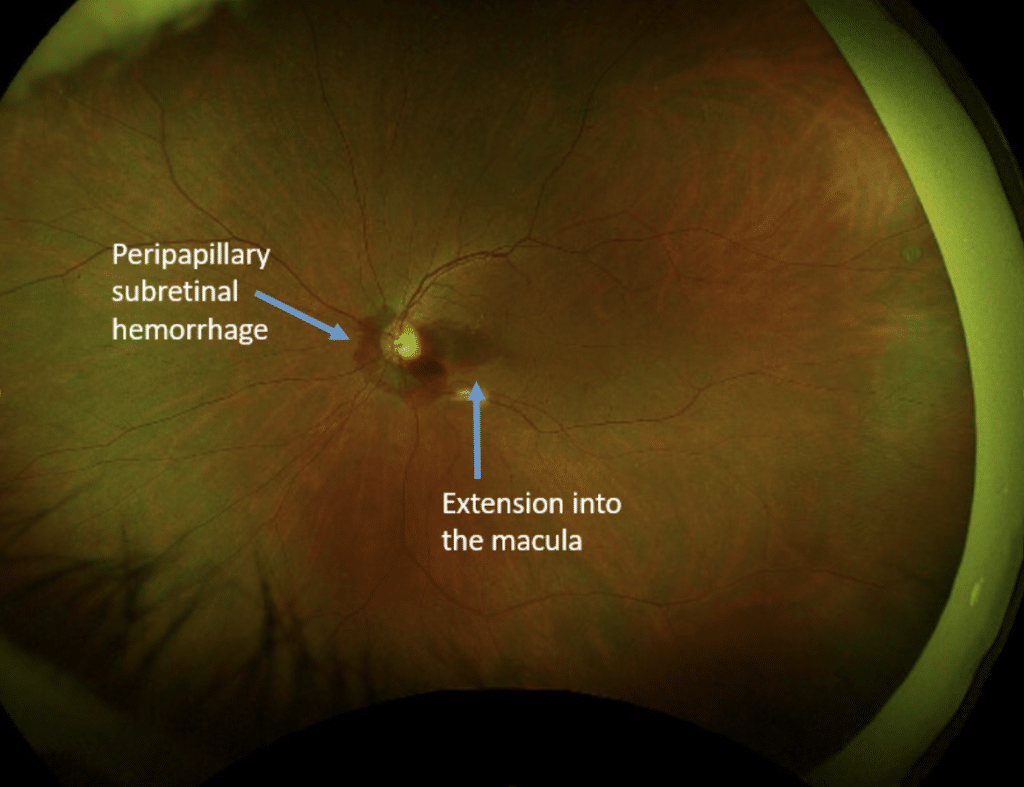 Here is a closer look at the area. You can clearly see the hemorrhage is in the subretinal space, as the retinal vessels are coursing over the hemorrhage. 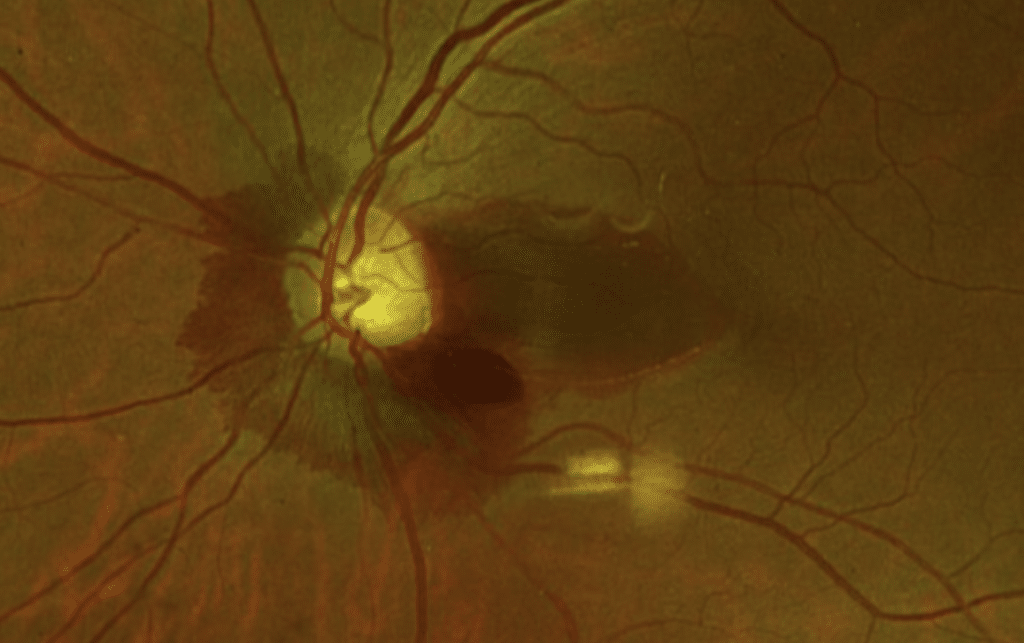 SD-OCT was used to further evaluate the macula 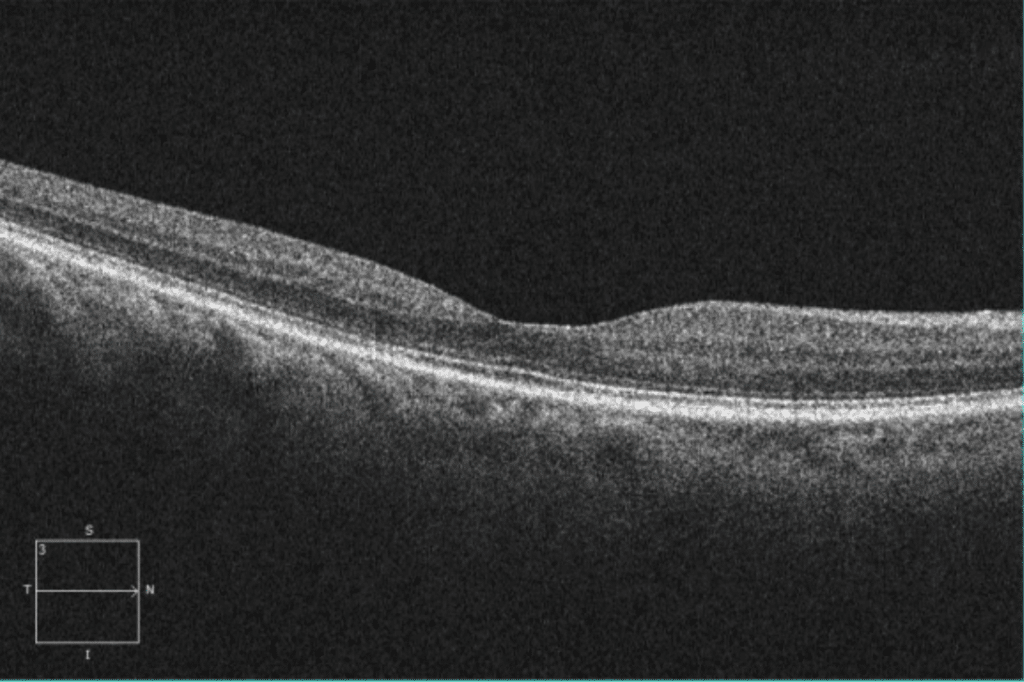 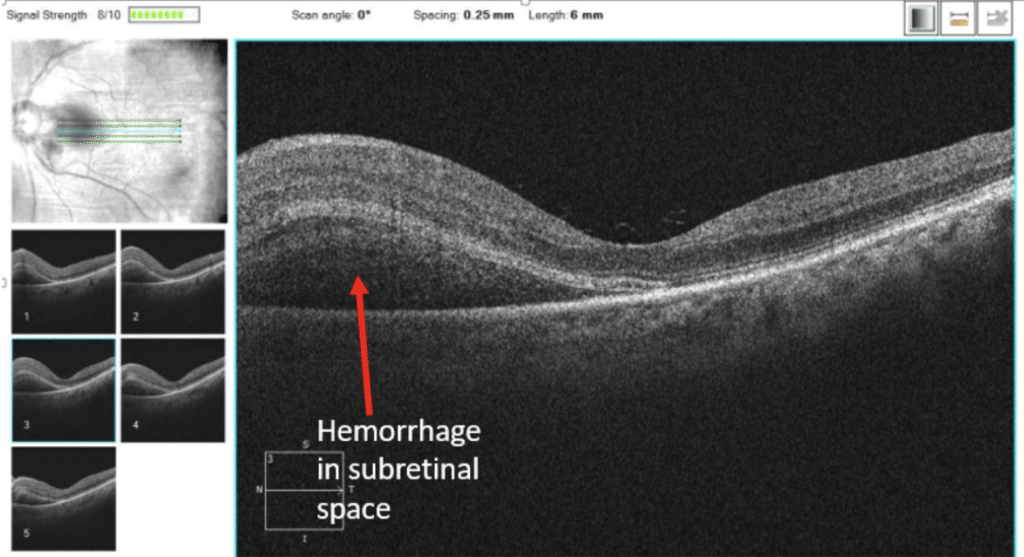 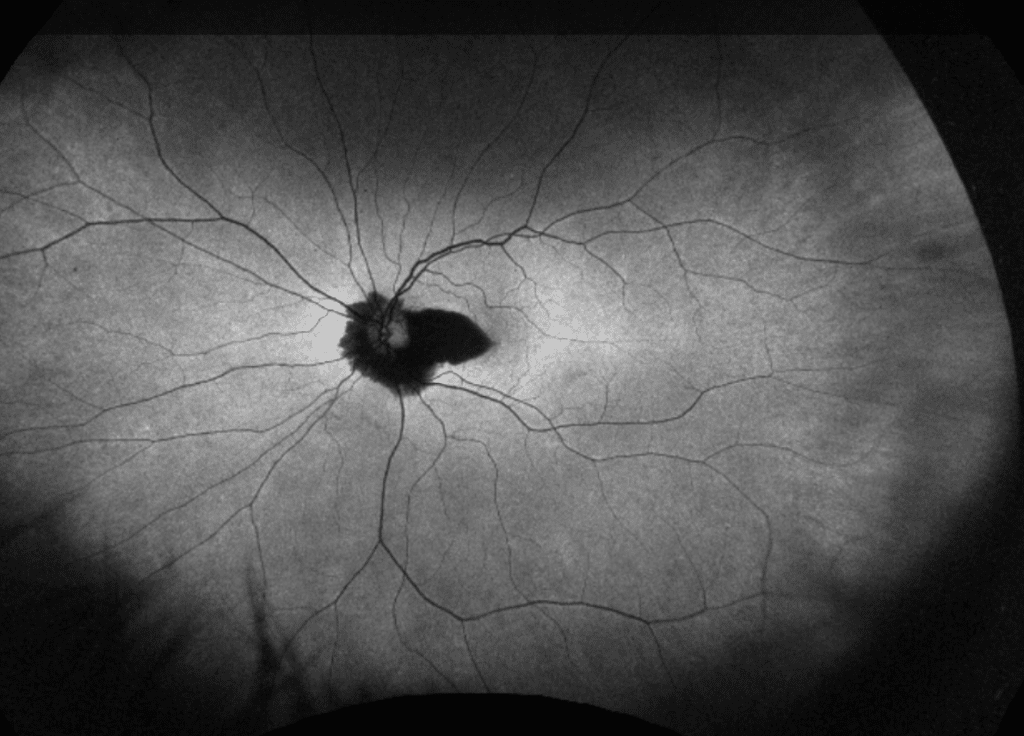 Mid-phase fluorescein angiography reveals peripapillary hyperfluorescence surrounded by a ring of hypofluorescence in the left eye. 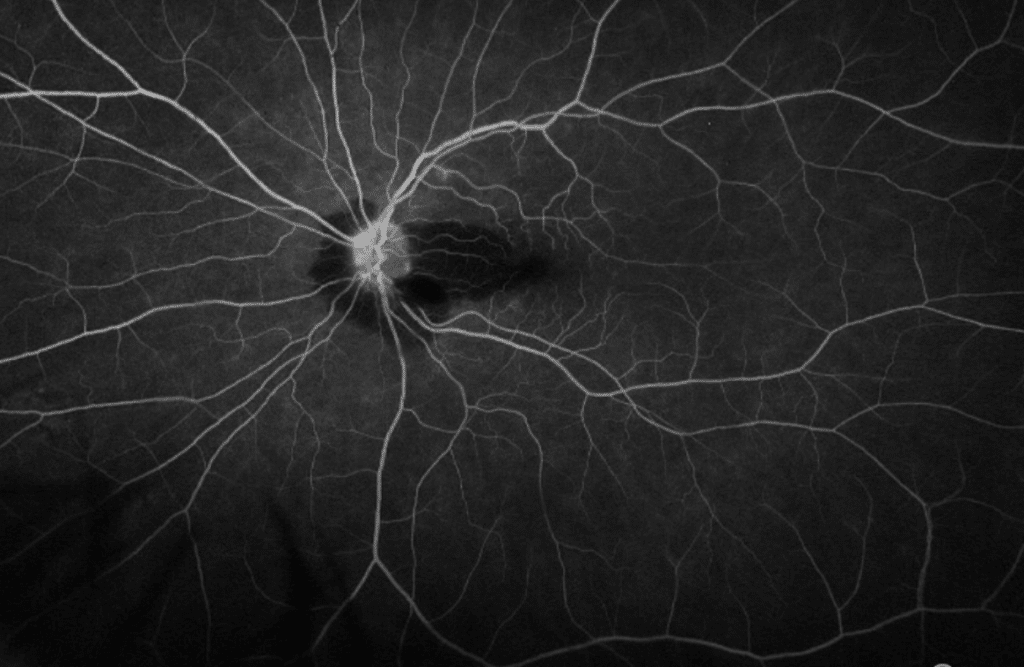 75 year-old woman with a vision threatening peripapillary and submacular hemorrhage due to a peripapillary choroidal neovascular membrane (PPCNVM).

PPCNVM is an infrequent cause of vision loss.  However, PPCNVMs are within the spectrum of diseases that can potentially cause permanent loss of vision. They represent less than 10% of all newly recognized types of CNVM. PPCNVM can be idiopathic, but are more commonly associated with age-related macular degeneration. They can also occur in eyes with inflammatory disease (eg chorioretinitis, or POHS), degenerative myopia, angioid streaks, choroidal osteoma or optic disc drusen. PPCNVM is more common in women than men. They are generally asymptomatic early on but can cause vision loss if left untreated.

Treatment for PPCNVM includes the use of intravitreal injections of anti-VEGF agents to stop bleeding and exudation. Photocoagulation of the CNVM with laser can be used in conjunction with anti-VEGF injections if needed.

In our case, we started treatment that day with an injection of Avastin into the left eye. Given that the hemorrhage was fovea threatening, I decided to put the patient on a regimen of q2 week intravitreal injections, alternating between 2 different drugs (Avastin and Eylea).

After a single injection of avastin, the appearance of the hemorrhage on OCT was improved 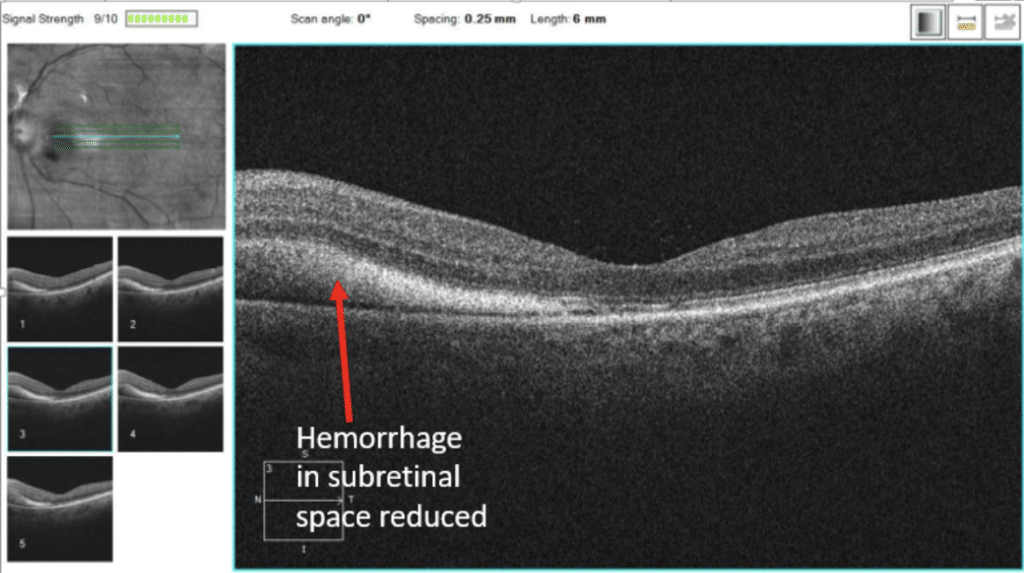 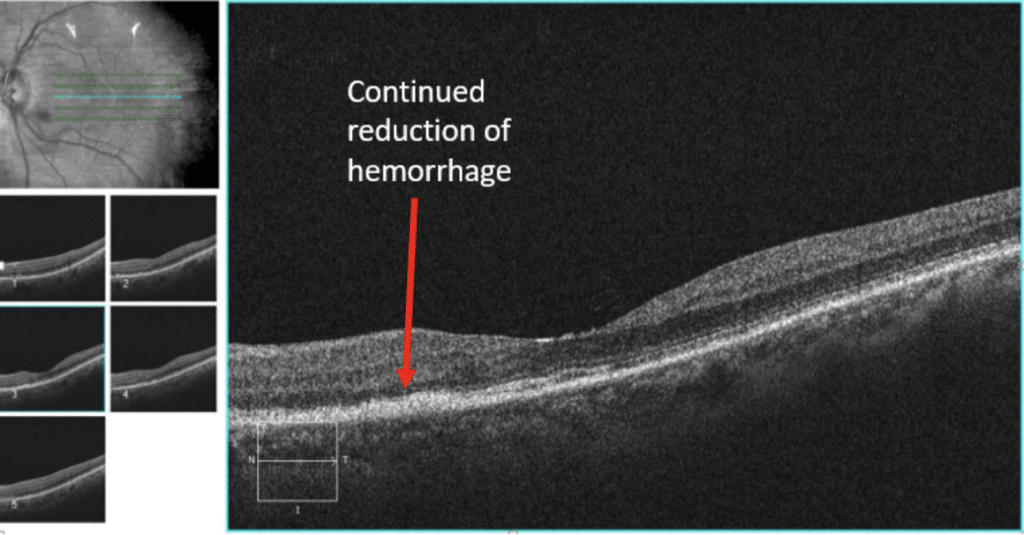 After 1 more round of both Avastin and Eylea, the hemorrhage completely resolved. The patient noted the wavy vision and dark spot in her vision were gone. 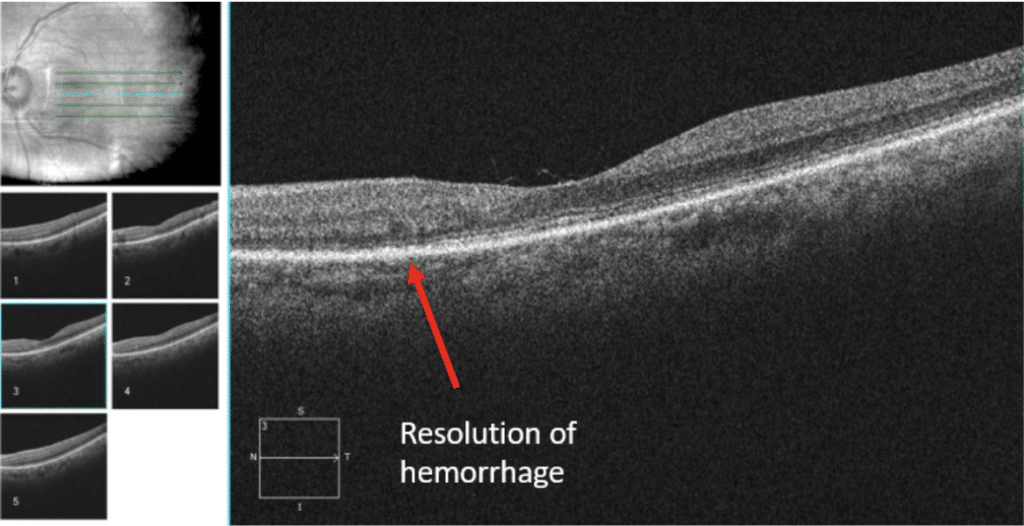 Follow up widefield color photo confirms the hemorrhage is resolved. 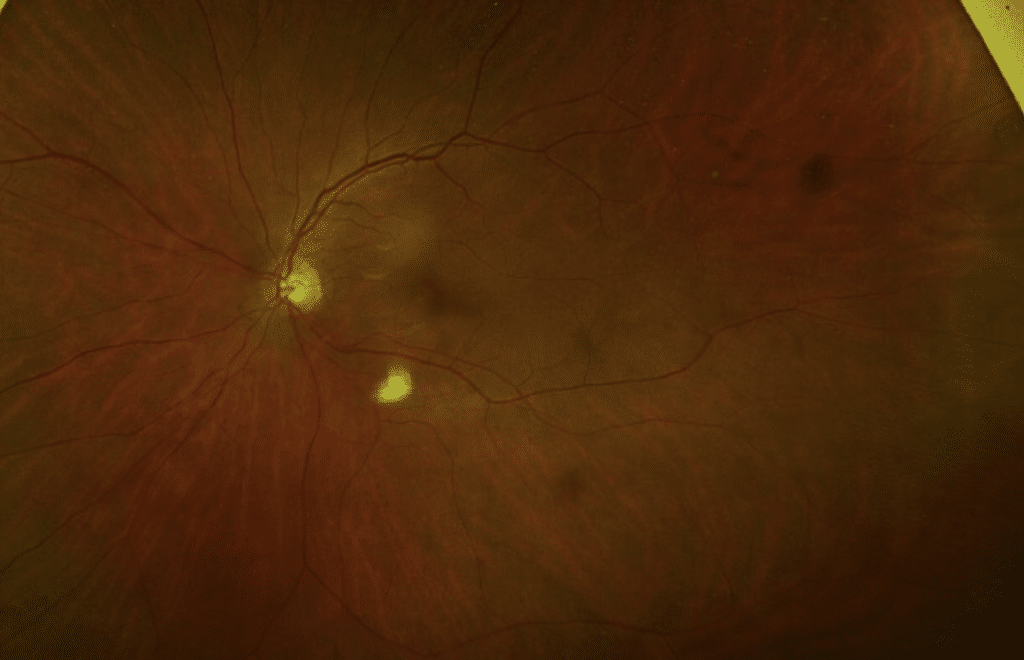 The patient will have close follow up every few months to evaluate for recurrences of the CNVM. She will be treated with anti-VEGF injections on an “as needed” basis.