A 64 year-old woman was referred to me by her OD for retinal hemorrhages in the right eye. The patient had not noticed any visual changes and had no complaints. She reported a past medical history which included hypertension, type 2 diabetes, and hyperlipidemia, which were all well controlled on medications.

The exam on the day of consultation revealed the following:

Dilated funduscopic examination revealed that the patient had 360 degrees of mid-peripheral intraretinal hemorrhages in the right eye. There was no evidence of lipid, or vascular tortuosity. The left eye had no evidence of hemorrhages. Here are the color fundus photographs. 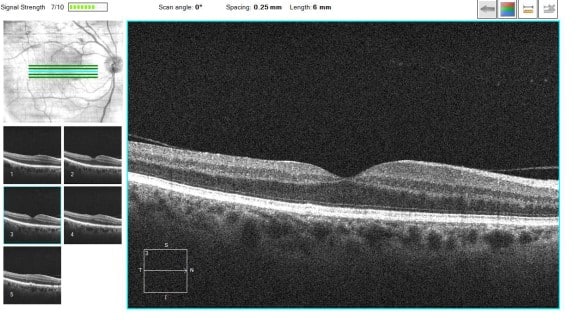 SD-OCT through the macula showed no macular edema in either eye. However, there was evidence of vitreous syneresis OU and mild RPE changes. 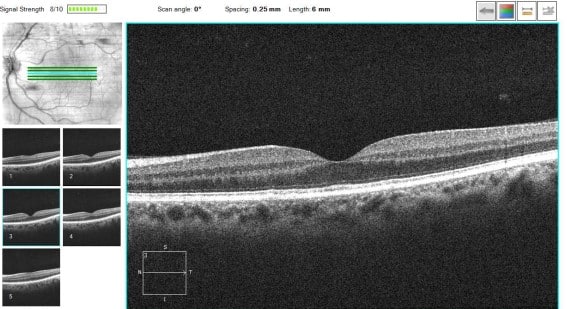 The findings of severe unilateral retinal disease was not consistent with typical diabetic or hypertensive retinopathy. Usually, diabetic retinopathy presents with symmetric retinal changes, as the elevated blood glucose causes vascular damage in both eyes. Additionally, the picture was not consistent with a central retinal vein occlusion, as there was no vascular tortuosity, or macular edema.

We delved a bit deeper into the patient’s history and asked her additional questions about her ophthalmic and medical history.

In 2015, the patient had presented to our office with the complaint of bumping into objects on her left side. She had seen one of our glaucoma specialists who performed a visual field test. The results showed the following: 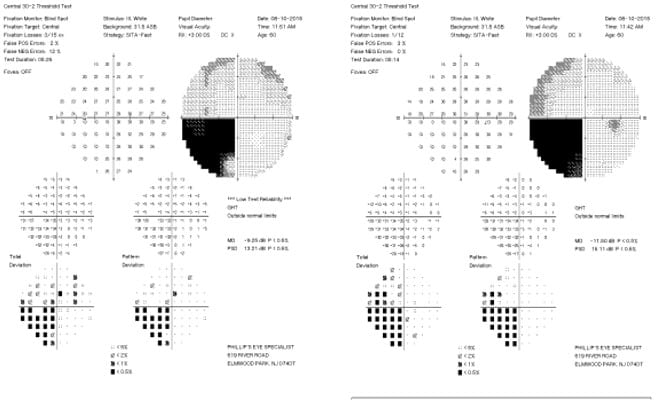 The HVF showed a stark and deep homonymous left lower quadrant defect. The patient was referred for further medical workup for possible stroke. MRI revealed the patient had had a right sided ischemic stroke. Additionally, carotid ultrasound revealed that the cause of the stroke was a right sided carotid dissection.

A carotid dissection is a tear in the wall of the carotid artery that causes diminished blood flow to structures above the neck. Overextension of the neck can cause a dissection.  Other causes are trauma or chiropractic manipulation. Carotid dissection is associated with ipsilateral Horner’s syndrome, as well as ocular ischemic syndrome. Given the constellation of findings in this patient’s case, we diagnosed her with ocular ischemic syndrome.

Treatment is aimed at treating the retinal ischemia and reducing intraocular inflammation.

As the patient had evidence of ischemia of only the posterior segment. We decided to initiate treatment for this patient with intravitreal injections for bevacizumab and pan retinal photocoagulation (PRP). Now following several injections, and PRP, the neovascularization of the retina has regressed, and there is no evidence of anterior segment involvement. IOP has remained normal throughout the treatment course.

Below is a follow up FA showing regression of the neovascularization, and staining of the laser treatment. 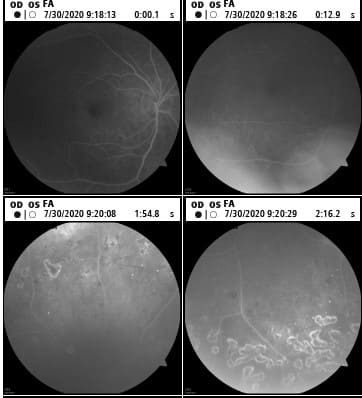