A 42 year old man was referred for retinal hemorrhaging.  He reported no significant past medical or ocular history.  He was asymptomatic although noted a few scattered floaters OU.  On examination VA was OU: 20/20.  IOP’s were normal.  The anterior segments were normal.

DFE is noted below: 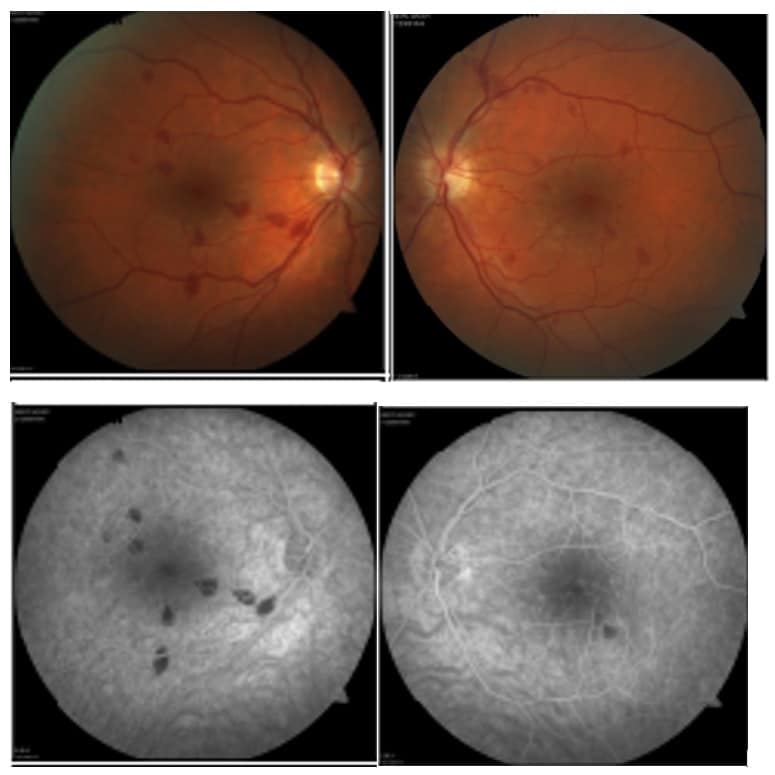 The patient has intraretinal blot hemorrhages OD> OS, mostly in the posterior pole.  The fovea is spared which likely explains why he is asymptomatic.  Retinal hemorrhages in a patient with no medical history should be taken seriously.  A lone hemorrhage in the periphery can result from vitreoretinal traction after dilation, but that would not explain multiple hemorrhages.  A single macular hemorrhage can result from straining (Valsalva retinopathy) but not multiple hemorrhages.  The findings suggest a medical issue.  If the hemorrhages are small and are accompanied by microaneurysms and lipid, it is likely diabetic retinopathy.  If they are more superficial and accompanied by arteriolar narrowing it is more likely due to undiagnosed hypertension.  If they are only peripheral, it is often sign of poor peripheral oxygenation such as from carotid disease or sleep apnea.  If they are monocular and in either one quadrant or diffuse, then either a BRVO or CRVO should be suspected.  Our patient’s hemorrhages were “Roth spots”.  The differential diagnosis for Roth spots includes anemia, leukemia, and subacute bacterial endocarditis.

We sent the patient to his medical doctor for the appropriate systemic testing.  He was noted to be anemic, which is unusual for a 42 year old man, but no leukemia or systemic infection was found.  He was treated conservatively and his blood counts gradually rose over the next several months.  He returned for follow up, still with no visual complaints.  The fundus was improved with a complete resolution of the Roth spots (see below).  Most patients with this finding have a serious medical condition.  Although he may have one that is still developing, for now he is in good health with a resolution of his retinal findings.